The origin of Etruscans in Tuscany has been a matter of debate for many centuries, with Roman scholars such as Livy claiming they were either from central Europe or original and indigenous people of central Italy. DNA testing done in 2007 verified information coming from the Greek historian Herodotus, written around 450 BCE. According to Herodotus, the Etruscans were originally Lydians, who lived in the western half of Turkey during the Iron Age. They evolved in this region after the decline of the famous Hittite Empire. At a time of crop failures and hunger, the Lydians had sent a part of their population west on boats that ended up in central Italy. This study showed that nearest genetic relatives for many of today’s Tuscans and Umbrians we would find, not in Italy, but around Izmir in Anatolia, Turkey.

The Latest Study of Etruscan Origin

The latest testing in 2013 of mitochondrial DNA has swung the results back in favor of Livy, showing that Etruscans appear to fall very close to a Neolithic population from Central Europe (after last Ice Age), and are ancestral to the modern inhabitants of Casentino and Volterra. This latest study is strongly suggesting that the Etruscan civilization developed locally from the Villanovan culture. These genetic links date back to at least 5,000 years to the Neolithic period, therefore predating the more recent Lydian and Anatolian connection. Stay tuned for further studies.

The first traces of Etruscan civilization in Italy date from about 1200 BCE. The ancient Romans referred to the Etruscans as the Tuscii or Etruscii. Their Roman name is the origin of the terms Tuscany, that refers to their heartland, and Etruria that refers to the wider region they controlled. Etruscan sites are located from north of Bologna to south of Rome. Etruria proper was roughly the territory between the rivers Arno and Tiber, including Tuscany, western Umbria and northern Latium. Etruscans were the founders of the city of Rome itself. The myth of Romulus and Remus was created in the 3rd century BCE and perpetuated during the reign of Augustus, to hide that fact. Even the legend of the she-wolf has Etruscan origins.

Around 700 BCE, borrowing Greek letters, the Etruscans wrote down their own language. We are left with many myths because Etruscan literature didn’t survive through Roman conquest and medieval upheavals. What we have is the limited vocabulary of inscriptions inside tombs and on art objects. They provide evidence of an advanced culture that included all aspects of civic, religious, economic and social life. And because the writings of Greeks and Romans tell us very little about Etruscan history, we must shift for clues in the vast remains of Etruscan art.

The 12 Cities of Etruria

Etruria was never a nation-state. They had a federation of 12 cities whose common meeting place was a sanctuary in Velsna, presumed to be modern-day Orvieto. The leaders of each city met there once a year. We have no archaeological evidence of this site or even which 12 cities exactly were included is uncertain. But they shared common culture, religion and commerce with a vast network of trade.

Cultural Influence from the Greeks

While Phoenicians and Greeks colonized Southern Italy, Sicily, Corsica and the French Riviera, the Etruscans were able to hold onto their land and growing trading routes. However, Etruscan culture was heavily influenced by the Greeks. Etruscans visited Greek shrines and shared their own temples. They adopted Greek customs, like the symposium (the formal drinking party), but developed their own rules such as including women. The Etruscan “aristocracy” shared many values with their Greek counterparts, including literacy, enjoyment of epic poetry and the ownership of finely crafted luxury items.

Etruscan Art and the Flight of Ikaros

Much of Etruscan art was actually produced by Greek artists. We can tell this by the style and the signatures of individual artists who had been settling in Etruria since the 7th century BCE. Greek painters, sculptors, bronze-smiths, and also carpenters, architects and masons were in great demand for their skills all around the Mediterranean.  Art historians usually give the highest value to Greek art, particularly Athenian of the classic period during 5th and 4th centuries BCE. It does appear that Etruscan art in some areas was behind the quality and technique produced in Athens, like with vase painting and marble sculpture, but ahead of the Athenians in gold jewelry and terra cotta figures.

Story of Ikaros has origins in Etruria

The oldest reference to the famous Greek mythological craftsman, Daedalus, who lost his son Ikaros on the flight westward, comes from an Etruscan clay jug found in a c. 650 BCE tomb located in the city of Cerveteri.

Archeological Sites and Museums in Etruria

The largest archaeological sites are at Cerveteri and Tarquinia. Other sites include Tuscania, Veii, Pygri, Perugia, Talamone, Vulci, Viterbo, Murlo, Chiusi, Orvieto, Volterra and Marzabotto. Many cities in the Etrurian area have very interesting archeological museums. The most extensive collection of artifacts, and some of the most famous objects, are located at the Villa Giulia museum in Rome. The smaller Chiusi Archaeological Museum was recently remodeled in 2003 and provides a very informative and user-friendly experience. We highly recommended a visit to the Chiusi Archaeological Museum for people vacationing in central Italy. You can visit the museum 9.30 am – 7.30 pm every day.

The Etruscan Tarquin dynasty ruled Rome until 509 BCE. The building of the city continued with Etruscan and Greco-Etruscan artists and craftsmen. The Augustan historian Livy tells us that for the building of the temple of Jupiter on Capitoline hill, artisans came from all over Etruria. The growing Rome conquered and absorbed the Etruscan cities one by one. The first was the city of Veii in 396 BCE. Etruscans became increasingly Romanized, their language replaced and eventually, in the year 90 BCE, Rome extended the rights of its citizenship throughout Etruria. Many famous Romans, such as Cicero, were proud of their Etruscan heritage and the emperor Claudius studied their language and wrote a history of the Etruscans.

We have several villas near Chiusi, such as Casa Poggio, La Casella, San Domenico and Casa Bella. 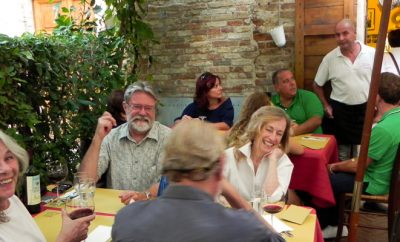 Osteria Etrusca
With all this good food around, sometimes only one important thing can make a restaurant stand out. Now I’m talking about hospitality. Our recent meal ...
Jun 04, 2015 , 0